This book discusses the Native Americans’ concepts of the Sacred Landscapes, Ceremonial Landscapes, Habitationscapes and the features associated with them and their relationship to areas of higher permeability / concentrated flows within the groundwater. In spite of diverse tribal beliefs and environments, as well as, during different historical periods, various aspects of cultural uniformity prevailed which are associated with these concepts. Johnson and his colleagues have investigated sites throughout the United States, Canada, Peru and Chile, as well as, in Europe and East Africa. Their data strongly suggests this was an ancient universal human concept which aligned the under, present and spiritual worlds. The book includes two hundred thirty five colored images of maps and stone features. It is spiral bound for use in the field. 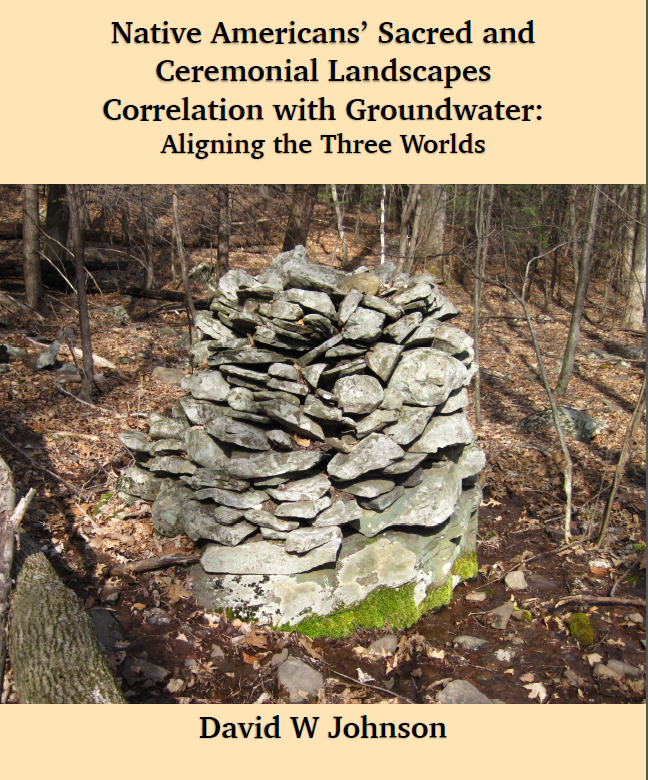 Mary and James Gage are a mother and son team of researchers whose work is, pun intended, rock solid. They have about 12 or so books out, each focused on certain aspects of stone work in the northeast, whether it’s colonial or indigenous stone work. This book covers the former, from historic types of quarrying (Egyptian, Roman, British) to types of stone quarries, to early splitting methods in New England, and to moving and transporting stones. Their work here (and in any of their books) is well cited and if you’re interested in differentiating between stone work done by colonials and natives, this is a great place to start.

A brief travel-guide to the stone structures of  New England, a good starting point to those developing an interest in the topic. Another by Mary and James Gage, this is the mini version of the Handbook below.

A Handbook of Stone Structures in Northeastern United States

Also by Mary and James Gage, this book is a must have when it comes to identifying the many stone features of the Northeast. Clocking in at a whopping 300-pages, this is the essential “stone structure encyclopedia” must-have in your collection. Comprehensive and complete, it will educate you on everything you need to know about stone structures.

Land of a Thousand Cairns: Revival of Old-Style Ceremonies

Another by the Gages, this book is split into 2 parts. The first covers colonial land usage, the recorded history of the land, and the genealogy of 3 Foster family farms. Part 2 covers indigenous ceremonial sites, analysis of ceremonial sites and farms, and the revival and arrangement of ceremonies on the farms. This is an eye-opening approach to looking at mixed cultural use of the same land and essential reading for one who wants to understand exactly what they are looking at. Highly recommended.

Not many of the stone structures of the northeast have been investigated scientifically. Until now. Professor Curtis Hoffman makes a brave statement here using sound scientific approach to Native American stone sites. Much of the book is about data and how it was processed to arrive at the conclusions of the book. This part is pretty boring, as even the author notes and advises you to skip over it if you aren’t interested and just want to get to the conclusions. Hoffman maps out known sites, whether Native, colonial, or other (rune stones, etc…), to show clusters in two ways; one, to show clusters on a geographical map to display the distribution of tribes, and two, to show schematics of sites where stonework is found. This book is an absolute must-have and is hopefully the start of a trend in the scientific and academic circles.

This book is controversial to say the least but I present it here because it is a prime example of needing the ability to process the information you’re being given. Fell asserts his theories that ancient cultures made it to America prior to Columbus but he takes many items out of context to try and fit his theory rather than letting the evidence guide him. *If* Barry ever was on to anything, he sure did himself a disservice with this approach. Read this book, but only to learn how to break down bad ideas. The Rock Art Blog by Peter Faris has a great series to help you break down Where Barry Fell.

Field Guide to the Mysterious Places of Eastern North America

If you’re in the northeast and you’re looking to get out into the field and visit some sites, this book is a good place to start. Lots of information about sites fills out the guide, but beware bogus theories and use your critical thinking skills.

The Search for Lost America: The Mysteries of the Stone Ruins

Trento sure has a knack for having both great and bad information. One of the most useful graphs on the orientations of stone chamber entrances is found within, but again, it’s rife with nonsensical theories. Critical thinking skills are a must here.

Another book where you need critical thinking skills, Thorson does a wonderful job of differentiating stone walls but fails miserably when it comes to attribution, claiming that only colonials built with stone in the northeast and that the natives “left the stones untouched”. If you can think around that major flaw in his writing, read this book.

Forest Forensics: A Field Guide to Reading the Forested Landscape

Changes in the Land: Indians, Colonists, and the Ecology of New England

A fascinating read about the differences between the Native and colonial mindsets about land and how colonial thinking changed the habitats created by Native tribes. Native thinking saw a balance in nature and using only what you need while colonial thinking saw untapped and endless resources ripe for taking. Includes many early accounts about what the land actually looked like when Europeans first arrived. Essential in understanding the country at the time of contact. Highly recommended, a must read!

Robert Ellis Cahill was a sheriff in Essex County for 30 years, and during that time he collected stories on all sorts of historic topics. Everything from the Salem Witch trials, lighthouses, Revolutionary War tales, naval stories, strange happenings, pirates and lost treasure, the Irish in New England, shipwrecks, monsters, amazing fish, superstitions, and Ancient Mysteries.

This is the book that got me started on all of this “stone stuff”, so I owe a lot to this book. It gave me sites to go to to touch see and experience with my own senses. It made me curious beyond belief to know what I was looking at and that curiosity was so strong that I’m still going 16 years later.

But it also filled my head with nonsensical ideas. Ideas that kept me from learning the truth. Ideas that I asserted to other people and likely appeared crazy to. It is with that in mind, that I ask you to ponder my next thought carefully.

The earliest researchers into stone oddities in the northeast were doing so in an age of little information (1930’s or so and onward). The Native American population had 300+ years of decimation, there were few tribes and fewer records. Colonial accounts of stone structures were few and buried deep in old books. The American Romanticism Era (1800-1840) was long forgotten about. The earliest researchers had little to go on and could only compare what they were seeing to what they knew existed in Europe. They were left to their own devices and had to come up with their own theories when academics refused to investigate or offered even worse theories or explanations.

Needless to say, you critical thinking skills are in order for this book as well. Lots of documentation of oddities, but few credible explanations.  I’m not blaming Robert here either, he was just reporting on what his good friend Jim Whittall had given him.

Another book by Cahill, same warning as above. Lots of good stuff (unfortunately no citations) and lots of not good stuff. Again, a lot coming from Whittall.

A good historic account of America’s Stonehenge in Salem, New Hampshire, complete with (in my opinion) a lot of now outdated theories. But they are part of what people believed at the time, and so it’s a good look at the past when you add the perspective that the archeological record does not support many of the outlandish theories presented herein.

This book also has a mix of good information and bad theories. Interesting for a beginner, but needs to be read with a critical mind.

The Westford Knight and Henry Sinclair: Evidence of a 14th Century Scottish Voyage to North America

Same as above, a lot of valuable research but in my opinion, but isn’t impartial enough.

Good book about a popular site and loads of great photos.

Ceremonial Stonework: The Enduring Native American Presence on the Land

A book similar to Trento’s Field Guide covering southern New York state and northern New Jersey, Mysterious Stone Sites is a good book to get started with. I am most impressed with Linda’s work on the Ramapo site and her discovery of a unit of measurement.

Probably the most important book published that seriously looks at the indigenous population as the main creators of stone sites in the northeast, Manitou is considered by many to be the authority on the topic. Mavor and Dix approached the topic diligently and intelligently, and stay away from making outlandish claims or assumptions. Get this book now if you don’t have it.

Spirits in Stone: The Secrets of Megalithic America

This is a very informative book about alignments between, and explanations of, stone constructions. There are some ideas in this book that extend beyond the scientific, which, if these sites have religious meaning, is to be expected. I’m not sure the scientific community can handle that sort of information yet, but never the less, Glenn’s research is extensive and he includes a few chapters by knowledgable and well informed guests. High recommendations.

Indian Villages and Place Names in Pennsylvania: with Numerous Historical Notes and References

This essential book was published in 1928 and reprinted, but the information about the Native populations and places is incredibly accurate and well cited. HIGHLY recommended, must read.

Lancaster County Indians: Annals of the Susquehannocks and Other Indian Tribes of Pennsylvania 1500-1763

Extremely accurate accounts of the native tribes of Pennsylvania, many based on first-hand accounts. MUST read. HIGHLY recommended.

1491: New Revelations of the Americas Before Columbus

These two books by Charles C. Mann cover both American continents, both before the arrival of Columbus and the Europeans and after. The books describe practices of the many tribes and cultures, and compares them to what was happening elsewhere in the world at that time, as well as the many changes that took place after the arrival of Europeans. These are long but well researched and very worthy of your time. VERY highly recommended.